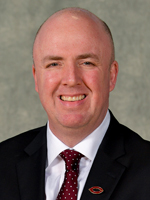 Mike McGrath is in his 23rd season as head men's basketball coach at the University of Chicago in 2021-22. He is the school's all-time leader in wins with an overall record of 298-209, including a 175-107 mark in University Athletic Association (UAA) play.

A three-time UAA Coach of the Year, McGrath has guided UChicago to a NCAA Division III Elite Eight berth and Sweet 16 appearance, as well as four UAA titles. Over his career at UChicago, McGrath has been named Illinois Basketball Coaches Association (IBCA) Coach of the Year four times – 2000, 2001, 2007, 2008.

McGrath garnered UAA Coach of the Year accolades in 2007-08 after leading the Maroons to their second-straight UAA championship and NCAA Division III tournament appearance. UChicago, which finished 18-8 overall and 11-3 in conference play, ranked 25th in the final D3hoops.com poll.

In 2000-01, McGrath guided the Maroons to their best-ever NCAA Division III finish, as UChicago advanced to the Elite Eight round of the national tournament. The Maroons finished that campaign with a record of 24-4 and ended the regular season ranked No. 1 in the nation. McGrath enjoyed a highly-successful debut campaign in 1999-2000, as he led the Maroons to a 23-4 record, the UAA title and a NCAA Division III Sweet 16 appearance

McGrath spent seven years as an assistant coach to Pat Cunningham from 1992-99. During that time, McGrath helped lead the Maroons to an overall record of 107-73 (.594), including an 82-23 mark (.781) from 1995-99. Under Cunningham and McGrath, UChicago garnered two UAA championships and advanced to the NCAA Division III Sweet 16 on two occasions.

During McGrath's 27 years as head and assistant coach, UChicago teams have compiled a combined record of 405-282 (.589), won six conference championships, and made six national postseason appearances.

McGrath is a 1992 graduate of DePauw University, where he spent three years as a student assistant coach. During his tenure at DePauw, the Tigers advanced to the 1990 NCAA Division III championship game. In 2003, McGrath and the other members of that team were inducted into the DePauw Athletics Hall of Fame

A native of Bartlett, Ill., McGrath earned a master's degree in sports management from the United States Sports Academy in 2004. He resides in Chicago with his wife, Kari. 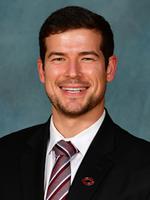 Bryan Joel is entering his 7th season as an assistant coach with the UChicago men's basketball staff in 2021-22. He was promoted to full-time assistant coach in June 2018 after serving the previous three years as a volunteer assistant coach.

In 2019, Joel was named to the National Association of Basketball Coaches (NABC) Under Armour 30-Under-30 Team, representing 30 of the most outstanding men’s college basketball coaches under the age of 30.

Joel graduated from Caltech in 2015 with a bachelor's degree in mechanical engineering. He went on to earn his master's degree in predictive analytics from Northwestern University in 2017.

Mike Mailhot is in his 4th year as assistant men's basketball coach with the Maroons.

Prior to Muhlenberg, Mailhot served as an assistant coach at Nichols College. During his three seasons, Nichols posted a 74-14 record and earned the first top 25 ranking in program history in 2017-18. He oversaw individual player development, played a key role in developing and implementing game plans for opponents, as well as daily practice plans.

Mailhot served as the offensive coordinator for the ninth and 12th-ranked scoring offenses in the country in 2016-17 and 2017-18. During those two seasons, Nichols won back-to-back Commonwealth Coast Conference Tournament Championships, and made the NCAA Tournament Round of 32 in 2016-17 – the first NCAA Tournament appearance in program history. Mailhot was instrumental in recruiting the class of Rookie of the Year and three-time First Team All-Conference selection DeAnte Bruton, as well as Second Team All-Conference selection Jerome Cunningham.

Mailhot is a 2013 graduate of Emmanuel College, where he played four years for the men's basketball program and was a two-year team captain. He graduated with a bachelor's degree in business management. He went on to earn his master's degree in business administration from Nichols in 2018.

Following his graduation, Mailhot stayed on at Emmanuel as an assistant coach for both the men's and women's teams, helping the women win the Great Northeast Athletic Conference regular-season title. Mailhot also served as an assistant coach at the United States Coast Guard Academy in 2014-15.